Josh Wink gives an interview on club vs. home life ahead of hometown Halloween gig. 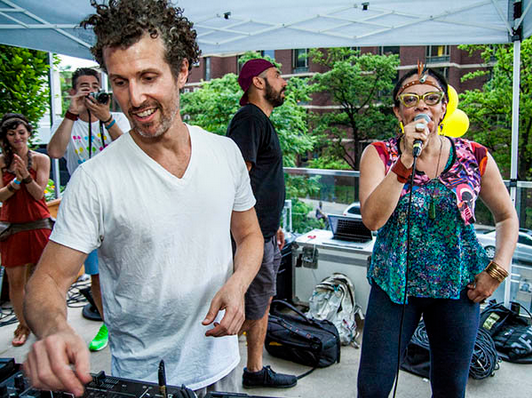 It’s a brisk fall afternoon when I meet up with Josh Wink at Northern Liberties record store Profond Music N Art. Josh has just arrived back from finishing an acclaimed summer residency in Ibiza and is helping organize his son’s birthday party before heading out to Amsterdam the next night.

“My son is four, so I’m still new to being a parent, and there’s all these things I try to balance: being a father and a partner to my wife, being ‘just Josh’ to the people I know from the neighborhood and community gardens, and then being Josh Wink the artist. Finding time to do other things is difficult, but there’s something nice and humble about being here in Philly. I like riding my bike places, I don’t have a car.”

This year marks the twentieth anniversary of Josh’s game-changing anthem “Higher State of Consciousness”, the first instrumental record to ever enter the UK’s top 15 national chart twice in one year. The track burst him onto the international scene and became heavily engrained with the first wave of pre-EDM stadium-packing electronic music that took the US and Europe by storm in the ‘90s.

Josh co-hosted a show on WKDU in the 90s called Rave FM, so you know we had to get him to do a station ID for us!

Over the years, Josh has racked up a lengthy resumé of transcendental dancefloor smashes, earning him the world’s most sought after DJ bookings, and cementing him as one of the foremost tastemakers in the scene while curating his Philly-based label Ovum Recordings.

For all his international fame and travels, Wink keeps a low profile in Philly.

“I like just being a Dad and a resident and not having to worry about things at home. When I’m in Ibiza walking around with my son, people come up to me asking for pictures. My son’s like, ‘Daddy is that your friend?’ and he’s trying to figure out why people are asking me for photos. He has an idea now, and when I’m leaving for a trip he’ll go, ‘Daddy are you going to the disco? Don’t go to the disco, stay home please.’”

“I don’t do gigs very much in town. Sometimes I’ll play the outdoor party Sundae and then I usually do one a year for my birthday called the Winkdown with local friends and sound-system crew Solomonic Sound. The last one we had was really amazing vibes and we’ve been thinking about other cool things we could do and Halloween came up. As a Dad, I want to be home to go trick-or-treating, so if we get a big name every year as a special guest, it could be really fun.”

It wasn’t always the case that hometown gigs were a rare thing for Josh. In the ‘80s and ‘90s, Wink was instrumental in reviving the city’s nightlife and creating a vibrant scene for both electronic and neo-soul heads while working with folks like Stephen Starr, who was then a concert promoter and also owned ‘The Bank’ club at 6th and Spring Garden, a building that still exists today.

“We started these parties which were very instrumental in the club scene called Vagabond. It was a collective of bartenders, DJs and artistic people that made Monday night the night to go out. We’d travel to a different club, different space every Monday and that helped us transform and get the night club scene hot again in Philly. I was able to get Deee-Lite to come and play a Monday night party at the Chestnut Cabaret back when their first album came out. Vagabond was like a really big to-do in getting people to appreciate nightclubbing rather than just Friday and Saturday night.”

One of the key members of the six-person Vagabond crew was a fellow DJ named Blake that Wink met while working as a bicycle messenger. Blake suggested that Wink meet the import buyer at Tower Records at the time, King Britt, because of their shared views on life. Before Wink and King went on to found Ovum Recordings and pioneer a wave of chart-topping dance hits together, they had a rather dubious exchange at Tower Records.

“At Tower they had imports, but you couldn’t listen to them – they were all shrink-wrapped and sealed. One of the records I was interested in was a double-pack and I opened it up. The security guy saw me on camera opening the record and took me aside. I said that King said it was OK for me to do that and then King got in a little bit of trouble. The next time King saw me, he sold me a really bad record saying it was the bomb. We went on to become great friends and roommates and joke about that record to this day.”

Josh’s set from our 2001 Electronic Music Marathon – converted from cassette!

Innovation has always been the name of the game for Wink – from his genre-bounding musical output, to throwing roving parties, to getting into clubs underage as a legal employee (he started as a bar back before becoming the youngest Billboard reporter at age 19). Using the relationships that Vagabond built with clubs across the city, Wink and Blake started the idea of getting outside of the clubs and threw the first warehouse parties in Philly in 1989.

“The Killtime warehouse at 38th and Lancaster was where the first Philly raves were. It was me and Blake who threw the party and then we invited King to play also. I can’t remember what time it went until, but it was lawless. The building was a squat house and the next room over had no ceiling where we put the kegs. There were so many people there and the floor was bowing like crazy. Who knows what could have happened, but you just didn’t think about that at the time.”

Momentum was building at home and beyond and Josh got an offer to DJ a night at Silk City, but couldn’t accept it because of prior gigs. Josh referred King to the job, who evolved the night into the legendary Back 2 Basics party before going on tour with popular hip-hop group Digable Planets.

“King was a little bit frustrated that he couldn’t make music on tour, so I told him when he was home to come start the label with me – that’s how Ovum started in ‘94. We became a life-based music label with a ton of different material. We were releasing King’s acid jazz kind of house-y stuff, we had Jamie Myerson who was a New Jersey guy that was doing drum and bass stuff on pioneering labels like Reinforce from the UK and then I was doing the techno, house and acid house.”

A year after Ovum started, Josh’s massive “Higher States of Consciousness” came out in ‘95, bringing on a flood of international DJ gigs and tour dates that could have easily uprooted him from the area.

“I ask myself why I didn’t leave Philly all the time, but I love it here. We’re like underdogs – there’s a neat mentality of people and we’re all Rocky Balboa in a sense. Everybody’s always looking at us compared to New York and even back in the day I would have these big guest appearances up there, and then when I’d come back home, people would ask, ‘Hey could you play something that they’d play up in New York?’ It’s always been that way though and people don’t know that King, Rich Medina, and all of us are friends. Everybody always says, ‘You guys from Philly are so down to earth!’ I think that really says a lot about the city.”

Our interview wraps up and talk of upcoming label projects returns back to his agenda of getting through Amsterdam and Halloween.

“My son said he wanted to dress up as the Millenium Falcon even though he’s never seen Star Wars in his life. My wife thought he said he wanted be to a falcon, but then suggested I be Wookiee or Han Solo – so we’re still trying to figure that one out.”

Wassup. View all posts by chrisburrell55